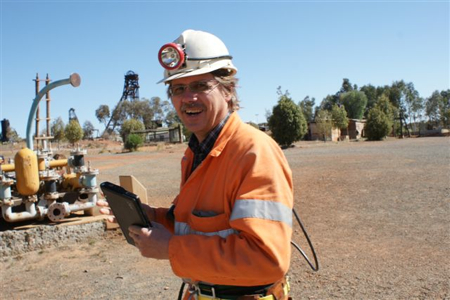 Where to start? My first job in 1977, was with Shannon & Wilson as Bob Bentley's assistant on a summer field job. Jobs for geologists were far and few between in those days. So, after finishing that job and with a bank full of money, no school for the first time in my life, I took off with Craig Dahl (BS '77) to travel the South Pacific and ended up in Australia.

Upon my return to Ellensburg, a year later, I found employment for geologists hadn't really improved in my absence. I set about sending out resumes to any and all companies I thought I might want to work for, some 200 resumes in all. I had 32 replies with two leading to interviews which landed me with a job with National Soil Services based in Dallas Texas. I worked in Eastern Texas and Louisiana as an Engineering Geologist and although good experience, it lacked something for me. After a period of time with them I jumped at the opportunity to secure my first exploration geologist position with Preussag Canada Ltd based in Vancouver B.C. I worked in the Plumas County Copper belt in the Lake Almanor region in Northern California for the summer field season and lived in a company house on the lake - a tough life. We pretty much worked daylight to dark 7 days a week for 6 months but loved every minute of it.

After the summer field season and with no prospects of work over the winter months, I decided to travel back to Australia to see about work there. Whilst there, I organised a job with CRA Exploration, one of the big 4 Exploration companies in Australia at that time. They agreed to sponsor me to migrate to Australia. So back to the US to apply to migrate. In the meantime, whilst waiting for word from the Australian consulate, I got two months work in Alaska with WGM Inc. on two projects, one for gold and one for base metal exploration. Upon my return to Ellensburg I waited another 4 months until I finally got the all clear from Australia to migrate and in February 1981, I sold up my worldly possessions and caught a plane to Sydney. I travelled down to Melbourne to head office where I started work in May of 1981. I spent 3 months in the Victorian goldfields before the company sent me to the wilds of Papua New Guinea for 12 months, a totally new and fantastic experience. This really was the frontier. After the 12 months, I returned to Australia to a depressed employment market for geologists. A fellow geologist from PNG and myself set up a consulting firm in Melbourne and struggled for the next year. We managed to keep ourselves busy with work in Victoria, Tasmania, Western Australia and Indonesia on various projects.

Eventually I decided to go back to University and further my education, a much too familiar story during any mining downturn. I enrolled in the geology department of the University of New South Wales for a Masters degree in Hydrogeology and Environmental Science. The thought was to change direction in my career. After having sold my sports car to fund my further education and finishing all the course work for the degree, I decided I wasn't sure what to do my thesis on and was tired of being a poor student. The lure of employment in the mining boom in the West was too much and I took a job as a mine geologist with Western Mining Corporation who sent me to the middle of nowhere Western Australia. After a year there, I accepted the position of Exploration Manager for a small gold exploration company and moved to Kalgoorlie, Western Australia - gold capital of Australia. Soon after I married my wife and within a few years we had two daughters.

During the next mining downturn, I left the mainstream mining industry to pursue an interest in movies. I took a job at the local cinema and learned projection, eventually becoming the manager. During this period, I continued my interest in geology by forming a private mining syndicate with a group of local businessmen. Over the next 3 years, we acquired mineral tenements and put them together into a package which we sold for a nice profit to a mining company. We used these funds to purchase a gold mine which we also eventually sold. I continued my career in the movies but always keeping tabs on the mining industry.

With the kids having grown up, one in hospitality and the other an environmental scientist, I thought it time to get serious about my geology again. I took a position at the Australian Prospectors and Miners Hall of Fame in Kalgoorlie as an underground tour guide. It was a fantastic job. I met people from all around Australia and the world and got to talk geology and gold again. Of course, the inevitable occurred with another mining boom in Australia and an extreme shortage of experienced geologists, so back I went. I took a position in the Exploration department at the St. Ives gold mine in Kambalda in Western Australia, owned and operated by Goldfields of South Africa. They were the 5th largest gold producer in Australia at the time. It was a great place to work with gold everywhere, however, after 23 years in the goldfields of Western Australia the call to move on was too great and an opportunity to take up a position exploring for base metals in Western Tasmania was on the cards. I spent a year and a half living in the historic silver lead mining town of Zeehan on the west coast of Tasmania. Quite a change from outback Western Australia. I now manage that company and live on the Northwest coast of Tasmania in the city of Burnie. We have since sold our mineral tenements but have a very large investment in a Western Australian Lithium Explorer and producer. I continue to work as a geologist for other small companies predominately in Tasmania.

Everywhere I have been with my profession would not have been possible if not for my time at CWU Geology. I didn't even know what geology was before I enrolled in that first course. A friend of mine suggested it. He said the course was called Physical Geology and he thought it was interesting and I might like it, worst case scenario, it was worth 5 credits. I thought what the heck. I was looking for something that interested me, having decided my present course of study was not for me. Bob Bentley took that class and all this stuff about plate tectonics and how the Earth evolved, I was hooked. I never really looked at geology as a career that would get me to where I am today, but it surely has.
If you happen to be traveling through the beautiful northwest of Tasmania, stop in and have a chat and a cold Tassie beer.