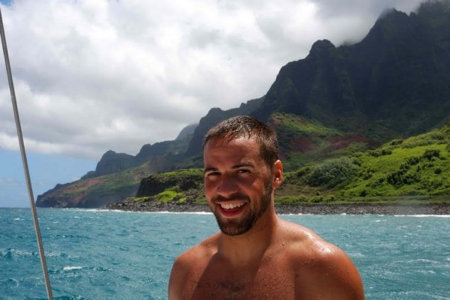 I work for the US Navy Geothermal Program Office. It is our mission to explore for geothermal resources on DoD managed lands and then partner with industry to develop the resource and share in the revenue. Our office was born out of the development of the Coso Geothermal Field that is located at the Naval Air Weapons Station, China Lake, CA. Coso is the third largest plant of its kind in North America with an installed capacity of 270 megawatts. That is enough electricity to power almost 270,000 homes with a negligible amount of emissions. Although I don't think there are other Coso's hiding on bases in the US, I do feel that there are plenty of smaller potential geothermal resources available for power production and direct use.

Projects I'm currently involved in include neotectonic studies using LiDAR to map Holocene faults in Dixie Valley, NV and the island of Guam. Geologic mapping and thermochronology on one of our bombing ranges here at China Lake. Self-potential geophysical survey in the western piedmont of the Chocolate Mtns just East of the Salton Sea. We are currently working towards a collaboration with DOE and industry to create a very detailed exploration dataset for the entire Dixie Valley. This includes collecting 3D magnetotelluric data, building 3-4 temporary passive seismic arrays, acquiring ~500 gravity stations, soil geochemistry surveys, a number of 2D seismic lines, and a statistical analysis of all data by a professional from the mining industry. These are collected and analyzed for the intelligent placement of costly geophysical test holes and to help us further develop an effective geothermal exploration model for a magmatic systems in the basin and range for both traditional geothermal systems and for enhanced geothermal systems. These are just the projects that I'm directly involved with.

Our office is in various stages of exploration at multiple military bases in Nevada, California, Arizona, Guam, Africa, and Japan. Our office is dedicated to advancing the science of geothermal exploration by reinvesting a considerable portion of the revenue gained from the sale of electricity at the Coso Geothermal Field into the universities and people who help conduct the cutting-edge research that drives our exploration projects.