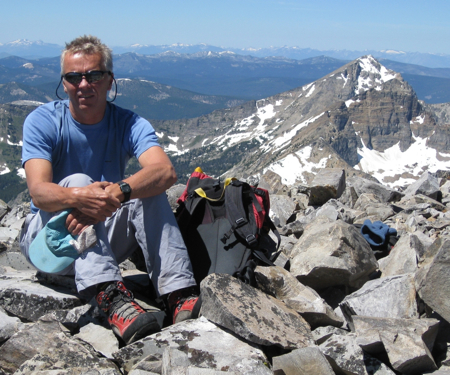 CWSC Geology, earliest 70's; that's starting to seem like a while ago. Yet, the memories are strong, the camaraderie was excellent. The geo-cohort was an engaging, eclectic mix of students with world views shaped by small town upbringings to recent experiences in Vietnam. Bentley tricked me into majoring in geology (serendipity at its best) when I was taking a couple geology courses due to my interest in backpacking and understanding the Cascades. That led to a job, supported by student affairs, tutoring freshman geology. Since few were interested in my advice, they paid me to study. Getting paid to study struck me as a good deal, so I stuck with it through graduate school at Western Washington, then the University of Wyoming. Arguably, I'm still on that theme as a professor at the University of Montana. It's been good.

In graduate school, I sidestepped an interest (Bentley's fault again) in deformation mechanisms of high grade rocks. Largely, my change in interest to geophysics was because I had decided following the optical and petrology classes that I never wanted to go near another microscope. Bentley delivered those classes with great enthusiasm, but the professor had much more passion for being glued to the ocular than this student. Dr. Ringe's Glacial Geomorphology class certainly caught my attention, but the then developing story in global tectonics was infectious. A final treat at Central was Dr. Farkas' hiring me to be the teaching assistant for the summer field course (BC and the Yukon!) in 1973. That 'job' was a super capstone experience and one - in those idealistic days - I would have taken just for cheeseburgers and beer(s).

My graduate school interests and research were global tectonics and geomagnetism. That led to a short term small business venture with a friend in gravity and magnetic exploration consulting in the late 70's early 80's energy boom. However, the flexible life style associated with academics was a big draw. I took my position at the University of Montana in 1981. A range of geophysics comprises my research and teaching at UM. I currently entertain myself with geophysical applications in archaeology and maintain a long term interest in processing and interpreting gravity and magnetic data at crustal through environmental scales.

For life beyond career, alpine climbing has held my interest for decades. Jack Powell ('75) helped further that interest when I met some of his climbing mentors who were well respected Cascade alpinists. Thanks Jack. The mix of climbing and geology has been fantastic; Antarctica, Canadian Arctic, French and Swiss Alps, New Zealand, Papua New Guinea, Peru, Bolivia, Chile, Philippines, Australia, Middle East, and the Rockies from Mexico to Alaska.

My experiences at Central have clearly shaped a lifetime. Oh yeah - married to a wonderful kindred spirit with similar career, education, and recreational interests; no kids, no pets, five bicycles, a myriad skis, a couple rifles, and heaps of climbing gear.