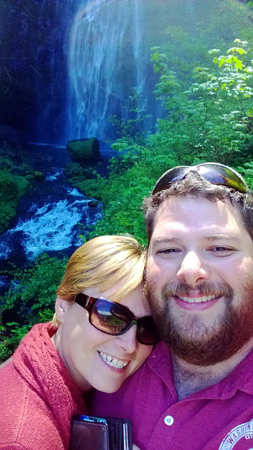 After graduating from CWU in summer 2007, I spent a few months looking for work, and landed in Richland with a job as a well-site geologist at the Hanford Nuclear Site in January 2008. Mostly this involved site monitoring of drilling activities, oversight of groundwater and soil sampling, documenting site activities and writing technical documents in support of the prime contractors at Hanford.

After a couple of years sitting drill rigs, I was tasked to support the characterization drilling projects as they planned to restart the program. This mostly involved background research on waste disposal areas we would be drilling through, generation of technical drilling documents and assisting in the restructuring documentation for the waste management plan.

It was at this time that I met Stacie (BA '08) when she was working as a field geologist for the same company I worked for. We began dating, and were married in February 2012. Married life was an adjustment for both of us, I think, but it has been great! We definitely have a lot of fun together...with our three dogs, four cats and the turtle.

In 2011, after the funding was cut for the characterization drilling projects, I was selected to work on a new contract at Hanford as a project analytical lead as part of the team for the River Corridor Closure Contract. Mostly my duties consisted of supervising characterization sampling work to assist in the generation of waste profiles. This work was more closely related to my previous experience in the hazardous waste industry, so I had a good background and really enjoyed the work. I worked on several large projects over the next couple of years, involving both building demolition and heavy excavation work.

Also in 2011, with some encouragement from Stacie, I started class work in pursuit of a Masters in Environmental Science at the WSU Tri-Cities branch campus. Working full-time and going to school part-time has been a challenge, but I have managed so far to get a thesis topic approved and am almost finished with classes. I am hoping to be finished by summer 2015.

As happens most often in cleanup work, I was beginning to see the end of my contract as the remediation work was finishing, and so began to look for a new job. Most recently I have started working as the EMS and Sustainability Coordinator at the Yakima Training Center. I am still very new to the job, and it is a departure from my usual experience, but I am looking forward to the challenge.

My time at CWU Geology really benefitted my career as I feel the program was really good for establishing a strong background in science, but also because the program is very field oriented. The geology field, and the typically the environmental field as well, tend to require a lot of time in the field. Especially at the start. I think that this emphasis on field work really benefits the students, and I know it has helped me.