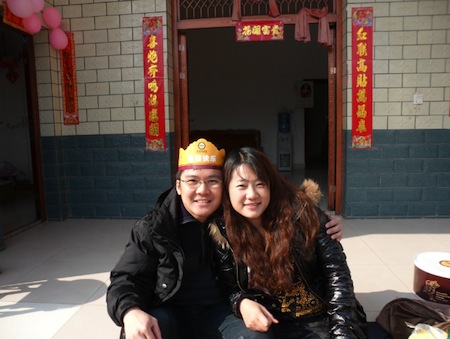 Last time I wrote to you it was two years ago. I was having a hard time then. During 2009 and 2010, I had been working as a part time worker for selling betting tickets in Hong Kong for over a year. For a part time job, it could still make quite a bit money, but that didn't work for long term. I kept looking for a full-time job.

At the end of 2010, I got a job as a project assistant in Towngas Company in Hong Kong. They were developing new businesses in China for coal and oil mines. It was a great opportunity. From then on, I stayed in China most of the time. For the first half of 2011, I stayed in Sichuan. During that time, my co-worker introduced May---my wife to me. And we had been together ever since. Since July 2011, I had been stationing at Inner Mongolia. There were many coal mines around. My duties mainly were about to help developing geology software for coal mines, and took care of consultants from the US. Right now it was about -20 degree C outside, chilly as hell, but I already got used to it.

May and I just had our wedding on 2012 New Year Day. Now I got a goal to build our own family. There were problems, stresses...but it just felt better to have an aim for myself.

I am stationing in Inner Mongolia but we will have our house in Sichuan. Right now I have to go back to both Sichuan and Hong Kong every other month. I hope some day I will still have a chance to come back to CWU and see you.

Being in CWU Geology was one of my most valuable experience in my life. It was also my happiest moment. Once started working, I realized it was so good to be a student.

Best wishes to everybody in the geology department!