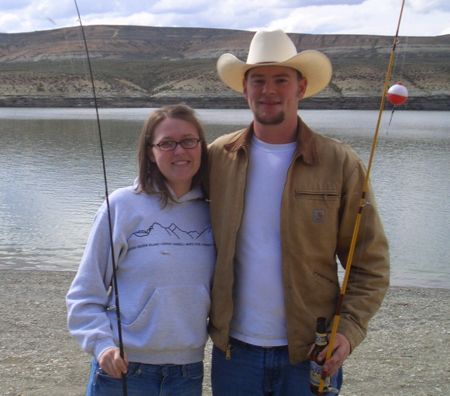 I moved to Green River, Wyoming in January 2008, and landed a job as a drafter at DR Griffin & Associates in February. DR Griffin is Wyoming's leading engineering and surveying company and is also a licensed developer for Garmin GPS. I help to create maps for clients in the Oil and Gas Industry, which inlcude regional base maps, field area maps, and topographic maps, using AutoCAD and GIS software. I also provide custom drafting and legal descriptions of property lots and boundaries, oil and gas facilities, drilling sites, pipelines, roads, and land parcels. I am learning a lot more about the oil & gas world than I ever though I would as a drafter.

For those who don't know, there are two seasons in Wyoming: Winter and Road Construction. It was quite a shock moving from mild Washington (and yes, even Ellensburg is "mild" compared to here) in January, when the temperatures are in the negative double digits and the wind never stops. Now that it's "Construction Season", the weather is considerably nicer and the wind doesn't seem to be so bad when it's warm. I think we'll make it.

Bobby and I are engaged and getting married September 7, 2008 back in Washington. Another CWU Geology love story for the books. It's quite nice having someone who understands when I get excited about road cuts - and is excited right along with me. We're lucky to have each other and be in such an overwhelmingly geologic state that we can explore together, which we try to do whenever possible.

I wouldn't trade my time at CWU Geology for all the money in the world. I feel like I was surrounded by great teachers and students alike. I made some of the best friends a person could ask for and enough memories to last a lifetime. My only wish is that there were more classes offered in petroleum, geological engineering, and reservoir geology. For people interested in working in the Oil & Gas Industry as a geologist, those are pretty crucial topics.

Good luck to everyone - CWU Geology truly does ROCK! (I couldn't resist).