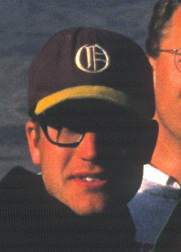 I was teaching middle school science in Seattle, but gave that up in 2006. Ten years of rotten teenagers was enough. I work for a cancer research company in Seattle called Cell Therapeutics. We are working on a drug for non-Hodgkin's lymphoma (NHL) and another for lung cancer in young women. We recently acquired an already approved compound for NHL called Zevalin that seems to work really well. As a clinical trial assistant, I provide the back- up for the different kinds of clinical trials that determine if a compound is safe and efficacious before the data is sent to the FDA for approval.

I got married a few years back to a nurse who works in the operating room at Swedish Hospital here in Seattle. We live in the same neighborhood I grew up in - Capitol Hill - where even with the current housing market, it is impossible to buy a house for less than $150 million. At least it seems like that. My wife's brothers know Chris Walls (BS '95) down in Southern California. I used to work with a guy who went to school with the sister of Joel Wells (BS '96). Both of those guys are MIA on the alumni page! They were two of the most "interesting" characters I had in any of my classes.