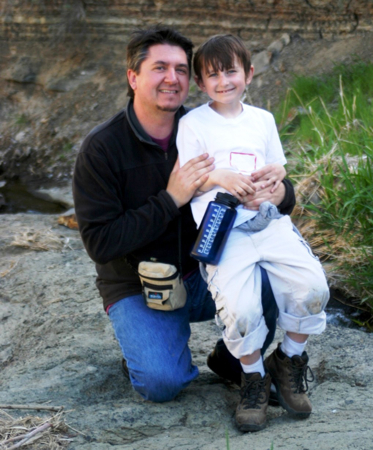 I left Ellensburg after graduating in the class of '94 -- undoubtedly the finest students CWU Geology has produced to date -- and completed an MS thesis on paleoseismic liquefaction at Northern Arizona University. I then took a job as Geologist and Archaeologist for Grant County PUD in Washington. Shortly after, I founded Columbia Geotechnical Associates, based out of Ellensburg - a company under the Brett Lenz International corporate umbrella. Along the way I've married (Dani Clingman), had three sons, Garreck, Haydn and Carver, and two dogs, Clovis and Ginger. In 2004 I started the PhD program at Leicester University, UK, which gives us the opportunity to travel to Europe a couple of times each year. In 2006 we relocated the company to Redmond, Washingtion which turned out to be a much better base.

I'm active in the GSA's Archaeological Geology Division - an enjoyable outlet for my long-standing interest in geoarchaeology. These days my research is focused on the Upper Pleistocene to Holocene transition - in particular, geomorphic and pedogenic response to late-glacial climate change. I'm in the process of defining two major geosols, the Bishop geosol which formed across the N.Am. Cordilleran between ~13.5 and 11.2 KBP and the Badger Mountain geosol which formed between 10 and 7.7KBP. Both are fantastic marker horizons which should help us understand timing of late-Quaternary deformation throughout the Pacific Northwest - and provide a baseline for understanding timing of the earliest archaeology of the region.

While I've lost touch with many former classmates, I stay connected to the department by harnessing CWU Geology students for project work - and am always extremely happy with the outcome. Like so many of my contemporaries at CWU, I owe much to Bob Bentley. Many Thanks to CWU Geology.