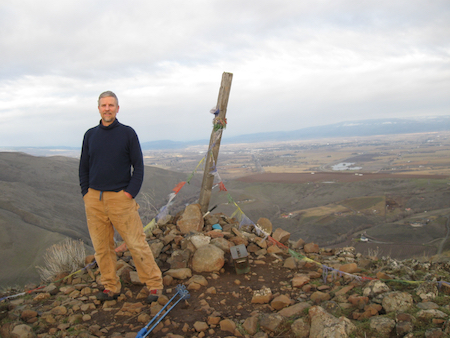 I graduated from Central in June 1974 with my geology degree, and then I worked all summer in the Alaska Brook Range doing mineral exploration for WGM Inc. In 1976 (spring semester) I was a Graduate Teaching Assistant at the University of Hawaii, Honolulu, HI. I was the instructor for three beginning geology labs; and the assistant in the Geology of Hawaii class. My summers of 1975 and 1976 included work for Cities Service Minerals Corp., doing base metal exploration in southeast Alaska on Prince of Wales Island and in the coast mountains of the Juneau Mining District. From April 1977 to August 1978 my work was uranium exploration for Urangesellschaft U.S.A. Inc. in Arizona. The investigation included rock and stream sediment sampling; mapping mines, prospects, and occurrences; and helicopter spectrometer reconnaissance. I worked as a Physical Science Technician in the summer of 1979 for the U.S. Bureau of Mines, Western Field Operations Center, Spokane, WA. I conducted mineral resource investigations of national forest lands as part of the Roadless Area Review and Evaluation program (RARE II). The investigation included underground and surface mapping of mines and prospects in the Central Cascades of Washington, and the White Mountains-Inyo Range of California. I was a Geology Instructor at Central Washington University, Ellensburg, during the 1980 winter and spring quarters. I taught four beginning geology labs winter quarter. Spring quarter I was the instructor for one beginning geology lab, the Petrology class, and the assistant for the field methods class. I worked in Alaska from May 1981 to September 1984 with the U.S. Bureau of Mines, Alaska Field Operations Center, Anchorage. From 1981 to 1983 I conducted a mineral investigation of the 790,880 acre Chugach National Forest in Prince William Sound. In 1984 I studied the abundance and distribution of critical and strategic minerals in the Kantishna Hills area of the Denali National Park and Preserve, Alaska. Analytical results from placer, panned concentrate, and stream sediment samples from the 1983 study were statistically analyzed and anomalous samples and their distribution identified. From September 1984 to February 1996, my work was for the U.S. Bureau of Mines, Intermountain Field Operations Center, Denver, CO. I conducted mineral resource assessments on proposed Wilderness Lands, BLM Lands, National Forests, and Indian Reservations. Investigations included a search of literature and mining claim records; interviews of mine owners, claim owners, government officials, and ranchers; and a field examination and mapping of the mines, prospects, and mineral deposits. Rock samples were collected and analyzed, and the data compiled into a published report with maps and tables. I reviewed Environmental Impact Statements to determine the economic impact of the project on mineral resources. I was the Utah State Mineral Officer and wrote the Utah Mineral Industry annual report for 1991 and the 1992 Mineral Industry preliminary report. Congress closed the U.S. Bureau of Mines in February 1996, so I got a job as a Payroll Technician for 10 years working for the National Business Center, Dept. of Commerce (NOAA), and the Veterans Affairs (VA). I finished my last 7 years as a Federal Employee with the VA as a Customer Service Representative providing medical coverage for veteran dependents. Then I retired June 2014, and moved back to Ellensburg where I continue to enjoy hiking, climbing adventures, geology talks and field trips.