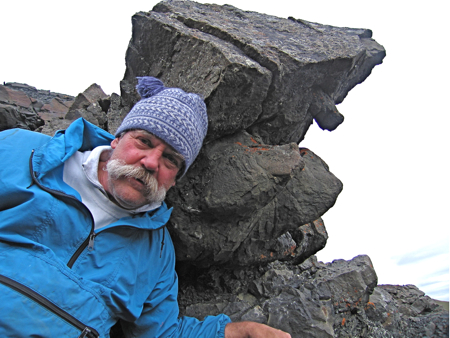 It's been a long and "unstable slope" road from Central Washington University to Denali National Park in Alaska. Because of my apparent geo-experience of working for the forest engineers at Wenatchee National Forest in Cle Elum while I was attending CWU, I had numerous job offers at the time of my graduation. Soon after a divorce, I accepted a position with the Bureau of Land Management in Shoshone, Idaho in January of 1980. After a few months of duty at Shoshone, the BLM sent me to the government mining and mineral law school for 6 months in Phoenix, Arizona. For several reasons, by August of '81, I had restless feet, and accepted a BLM job as a petroleum geologist on the North Slope of Alaska.

It was a dark and stormy mid-winter night in Fairbanks, Alaska (actually the days were also significantly dark). I found myself working on oil & gas lease sales in the winter and on mining claim patent exams in the summer. I became a tourist of many northern Alaska locations on this job, with much time away from home, and leading to another divorce (but who's counting?). A position opened up in Glennallen, Alaska (wear the fox hat?), and I extended my tour of the state in that area.

In May of 1986, park geologist positions opened in Wrangell St. Elias and Denali National Parks. I accepted the position at Denali, and have been there since. My job has evolved considerably to include mining claim administrative duties, geologic mapping, geotechnical applications, glacier monitoring, paleontological investigations, water and soil resources, and geo-educational outreach. I currently teach several field courses on local geology and paleontology. Lots of writing [check out Chapter 34 in "Geology of National Parks" 6th edition (Harris, Tuttle & Tuttle, 2004)], and perhaps most exciting are the recent dinosaur trace fossil finds in Denali (the first dino evidence in the interior of Alaska).

My current wife Barbara (who's counting?) and my two daughters live in Healy, Alaska, and although I lived in park housing for many years, I now have a 12-mile commute to the office every day, but the traffic load is very light, at least in the winter. I have much to be thankful for, including my experiences at CWU, and specifically Drs. Ringe and Higgins in the paleo-rave days of the late 1970's.

Photo: Brease with large hadrosaur footprint (load cast) framed by right side of head and shoulders and right arm.