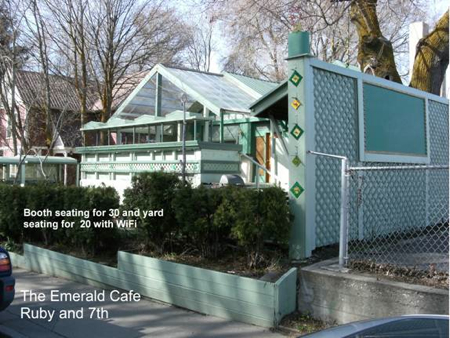 Rance is writing a book called "Life is an Epiphany" from his geology experience in tracking down the origins of the Kennewick Man with CWU Geology Emeritus professor Steve Farkas. Rance graduated in 1986 and Steve taught historical geology at CWU then.

The book begins in Mexico at the University of the Americas in Cholula, Puebla where Rance studied Anthropology in the 70's. He followed closely for several years the field and literary works of Carlos Castaneda and the Yaqui Way of Knowledge - the art of the Sorcerer. The book relates his studies and works in Australia, New Zealand with the aboriginals and the Maori then moves back to Central and South America for fish farming in Costa Rica and other studies at Texas A&M Sea Grant College.

The story picks up with the Kennewick Man discovery in 1996 working with Jim Chatters which led to the Kittitas Man discovery. It was only a series of hearth sites but it offers an explanation of how the Missoula Flood sequence may have erased the First Americans with sequential catastrophic floods across the Northwest. The site was north of Hwy 90 along a Pleistocene creek that connected the Yakima River to the Columbia over the pass to Vantage before the railroad overpass. It was a common trail used by early and later people for thousands of years.

Rance and Steve found multiple hearth-sites that gave indication that if the First Americans had survived the Missoula Floods in the Northwest, it could be in places like this. The area was down-cut to the basalt bedrock nearly 70ft in the syncline filled with loess deposits. The sheer walls was a geology book to read. Most interesting was the 2 ft layer of Mazama Ash that was the key marker for the Kennewick Man on the Columbia. Only one basalt arrow point was found below the time line of the Mazama ash to connect with 9,700 year timeline of the earlier peoples who we suspected arrived from the Aleutian land and island bridge from the Ainu Island of the Japan trench extending back through the Ice Age Maximum. Rance and Steve used new surveillance data to map the offshore continental shelves when sea levels were nearly 400ft lower than present to offer clues to where and how people would have lived and traveled when these great land masses were exposed.

The book mixes a lot of history and anthropology (and sorcery) with the solid evidence of geology. It concludes the final arrival of the journey on the shores of ancient Byzantium City with Hagia Sophia where evidence points to the point of birth of the biblical flood epic.

Geologists Tillman and Ballard have provided conclusive evidence that the Mediterranean in-flooded the Black Sea Lake around 5,600 years BCE. Professor Farkas was of Hungarian origin and has relations in that part of the world. Rance went to Spain to interview and film the Basque people to find any possible connection in their language (Euskara) with what would have been the original language of the people who lived along the shores of the Black Sea Lake before 5,600 BCE- reaching back perhaps 100,000 years.

Rance has the Emerald Cafe in Ellensburg on Ruby Street with the Glenn Beck Meet-up Club with open forum for writers and thinkers. His son Daniel at Ellensburg High School plans to make it a future hot spot for tourism - for his generation.