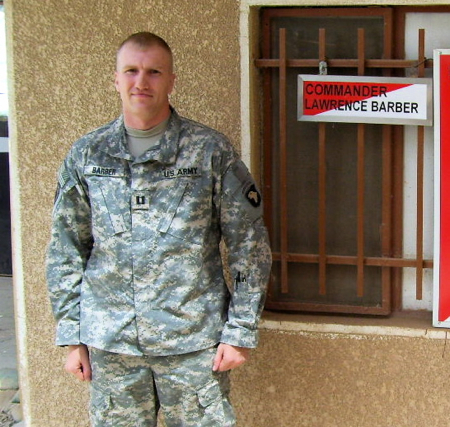 US Army Captain in Iraq

I fondly remember my time at CWU Geology. I knew what my major would be after my first geology course. The field problems were a challange - and a blast. The skills you learn during your time at Central will prepare you for a wide range of jobs. The friendships that you make there will always be fondly remembered. Learn as much as you can - and enjoy your time.

I spent some time in Europe, Nashville, and Iraq (Commander of HHT, 1-33 CAV, 3BCT, 101st ABN DIV (AASLT). We are stationed out of Ft Campbell, Kentucky, but currently are on a siesta in Iraq. I've seen a lot since I left Central. Geology gets in your blood. After college no matter what your job is, at heart you'll still be a Geologist.

I have a wife and three kids. Geology is a hobby, not my job right now. I still can't drive through the mountains without nearly driving off the road. My wife has learned that it's safer just to drive for me so I can marval at the road cuts, the folded shale, the jutting peaks of the Alps. She has learned to just let me be when I pull over at a particularly interesting geologic formation and wander along the highway for an hour. My boss no longer looks askance at me when I point out a huge fault on the satillite imagery running through the mountians of northern Iraq. (with a good 3-4 km of movement)

In the future I intend to get my Master's degree, and retire from the military the day after my 20th year. Then take up a job in Geology. Even if it's as a teacher during the winter and a guide at a National Park during the summer. That's if I don't win the lotto - or find a better job before then.