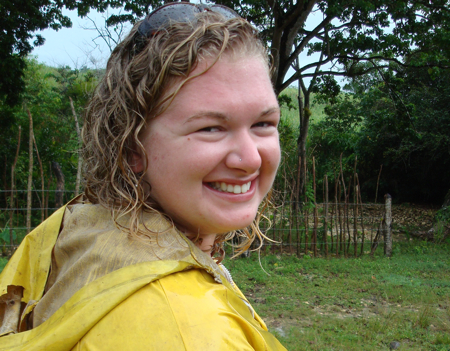 For a year after I graduated, I worked for a consulting firm in Everett, WA as an environmental geologist, doing primarily UST work. But I realized that I really missed working with rocks and examining structures. I got in contact with a company doing mineral exploration at a mine site in the small mining town of Concepcion del Oro, Zacatecas in north central Mexico.

I spent a year in Mexico working on a copper-gold skarn at an active mine, where we ran a large drilling operation (surface and sub-surface) both for exploration and confirmation sampling. It was crazy and very hectic at times, especially with the language barrier, but I learned priceless lessons about the industry, Spanish, and economic geology.

After Mexico, I flew back to the States, got in my car with my duffle bag and drove to Nevada to work on an amazing undeveloped copper-iron skarn deposit until the end of last year. After spending some time with my folks, I landed a gig as a Mine geologist outside of Yuma, AZ at an open pit gold mine. Interesting as it was, I found myself back in Nevada working at the above mentioned exploration project. Drills started turning mid-November and it's going well. I work somewhere around a 21/7 schedule, live in a hotel while I'm here and at the end of the hitch I usually head to the NW. It's a pretty nomadic lifestyle, I gave up on having an apartment since I'm rarely around, it definitely has pros and cons but for the most part I really enjoy it.

I often find myself fondly thinking back on the times at CWU. I'm so grateful for the fantastic professors, experiences, and opportunities that were afforded to me, and of course the amazing friendships that hopefully last a lifetime. Whoever thought that the skarn would mean anything to me other than an outcrop at Big Pine?