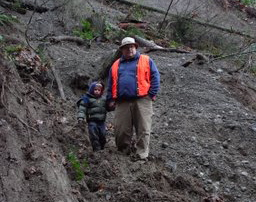 After graduating in 1998 from CWU, I moved to Greenville, North Carolina with my future wife Ruth Otteman. While she finished her Masters Degree in Geology there I taught a few courses at the university, including geology 101, and "earth science for educators." I created a geology/GIS "Cyber-Campus" course which I taught in the summer to K-12 Educators around NC via live video.

We moved back to Tacoma area in 2001, and were married that summer. I worked for a time for a consulting company in Bothell and decided to try something different and went to work for WA DNR. I was there exactly 1 year when the cyclic wave of lay-offs occurred, and I moved on.

After leaving DNR, I went to work for The Pacific Northwest Center for Geologic Mapping Studies (GeoMapNW), a grant-funded collaborative research center hosted by the Earth and Space Sciences Department at the University of Washington. The project goals are to acquire existing geologic data and create new geologic information; to conduct geologic research and produce new geologic maps; and to support the wide variety of additional research, hazard assessments, and land-use applications of others throughout the region.

My wife and I have two boys named Forest and Apollo, ages 4yr, and 5mo respectively.