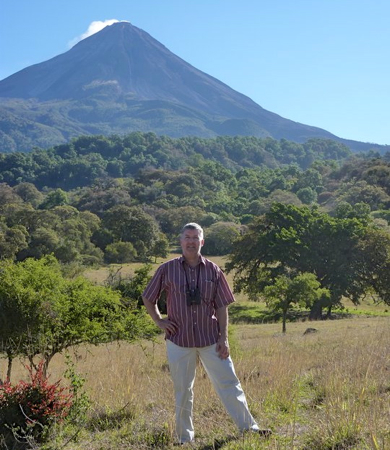 I returned to school to finish an undergraduate degree at CWU in 2006. Previously, I had followed with great interest the discovery of "slow-slip" along the Cascadia subduction zone (in part discovered by two CWU professors!). The subduction zone dips beneath the Pacific Northwest (my home) and helps "fuel" the Cascade arc volcanoes. Being extremely interested in the interaction between active volcanism with local tectonics, I often wondered if the recurrent slow slip events might somehow affect volcanic activity (internal or otherwise) at nearby Cascade volcanoes. The drive to find an answer to that question led me to enroll at...where else?...CWU. That initial curiousity was merely a catalyst which got me involved with two radiometric studies of eruptive products from the Oregon Cascades, a similar study of eruptive products from an obscure active volcano on the Chinese-North Korean border, as well as a deformation study of an active landslide near where I grew up...and that was just during my time as an undergraduate at CWU!

As a CWU graduate student, I was afforded the opportunity to visit an active (erupting!) volcano in Mexico to collect data for another project in addition to conducting research, collecting data (which included once a year, visits to another active volcano, this time in Oregon) and finally...writing a paper pertaining to my original question about possible volcano/slow-slip interaction in the Pacific Northwest!

Shortly after graduating with a Master's degree from CWU, I was "taken-on" by a gold mining company out of Vancouver, B.C. to work at a new mining prospect in west-central Idaho. Not exactly volcano-related work, but I have learned alot about the thermal-chemical interaction of a late lobe (Atlanta) of the Idaho Batholith, later intrusions related to the Challis Volcanic Arc, with an overlying metasedimentary packet (roof pendant). The company was virtually CWU South as I worked with six other CWU grads (four of which are still employed by the company!).

To have my family closer, we moved from Ellensburg to McCall, Idaho this past summer (2012). At the time, I thought I was moving further and further away from anything remotely volcanic, but come to find out, young Basin and Range faults cut through the McCall area and heatflow and earthquake activity here is surprisingly high! An active sill is being intruded about 30 km southeast of us and experienced a swarm of over 10,000 earthquakes in the fall of 2005!

Anyhow...due to the vagaries of the business, I was laid-off (just in time for Christmas!) two weeks ago (03 December). So, I'm back in the hunt for employment (hopefully for something more volcano-related!). In the mean-time, I'm writing a daily report on eruptive activity and volcano-seismicity for an information-driven blog out of the Netherlands, the "Worldwide Earthquake and Volcano Report".

I believe the excellent reputation of the CWU Department of Geological Sciences is what actually got me the Idaho job, and that reputation comes out of a perfect mix of excellent instructors, students and their shared projects and experiences as they learn geology together.