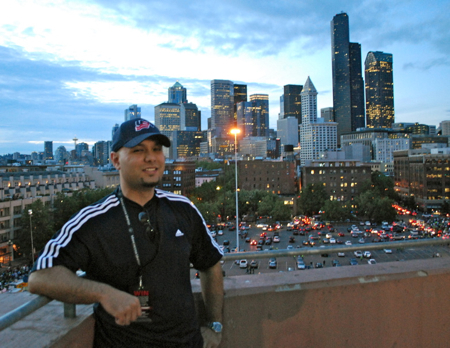 Here's an updated Cliffs Notes version of my alumni blurb as opposed to the monologue that was here before.

The spring following my 2004 Central graduation, I was hired on at Pearl Harbor as a "physical science technician" which in that context turned out to mean "nuclear work aboard submarines." I realized it wasn't remotely related to anything I studied in college. I stayed in the job from June 2005 to the end of 2008, paying off my student loans along the way.

In the fall of 2009, I began volunteering my GIS skills for the GIS department of Kitsap County. I did some quality control on their roads database, updated their database of building footprints, and updated some metadata.

The following summer, I latched onto a temporary GIS intern/technician position in Driggs, Idaho, with Teton County. I assisted with the large-scale readdressing of their entire county. I can't tell you too much about Driggs other than that I used it as a jumpoff point to visit a bunch of national parks. What a fun four months that was. Driggs is a good place to be if you want to go to Yellowstone on two different weekends. I really got my geology (and photography) on that summer with visits to Yellowstone, Grand Teton, Craters of the Moon, City of Rocks, Bryce Canyon, Zion, Arches, and Canyonlands (and Sinks Canyon in Wyoming). If you're planning on visiting Bryce, Zion, Canyonlands, and Arches on the same weekend, don't. Give yourself more time. The same applies to visiting Canyonlands and Arches on the same day. You'll feel like you didn't see enough of either.

The following February, I returned to Bremerton and resumed volunteering with Kitsap County, though this time I did a bunch of work with GPS receivers and interfaced with local fire departments.

In August 2011, Kitsap County hired me as a part-time GIS analyst, and I've since been extended through the end of 2012. While I've mostly done things relating to roads and addresses, I've also been looking at aerial imagery and trying to form a data dictionary.

Also happening last August: I was accepted into the University of Washington's Professional Master's Program for GIS. If all goes right, I should graduate in August of 2013. Distance learning is a really different animal.

I still overdose on sports and music (the metal just kept getting heavier), and I've also found this wonderful thing called Steam that helps me spend way too much money on PC games. It's not good for my studies.

All told, I still don't know exactly where life is going, but it's a lot more clear now (and a lot less depressing) than in my last submission to this page.