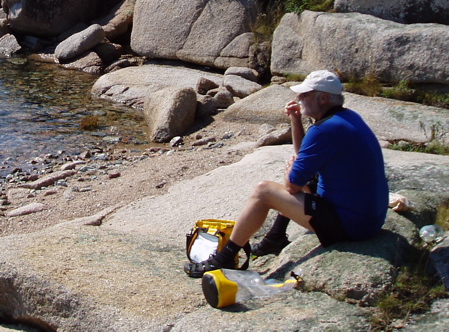 I am the section manager of the Toxics Cleanup Program in Yakima. I've been with the Washington State Department of Ecology for 22 years. I have hired several CWU students including geology students as interns and as permanent employees. After being asked to graduate in '82, I worked investigating smolt migration on the Columbia River, stripped bass use of abandoned piers on the Hudson River in Manhattan, an archaeologist in Washington and Oregon, a hydrogeologist studying groundwater in the Columbia Basin, providing environmental oversight on the states largest landfill at Roosevelt, Washington, investigating and closing other landfills in central Washington, and helping the state cleanup contaminated sites in central Washington.

I started my education at CWU in 1979 after several other careers. My education at Central was instrumental in my ability to obtain employment in scientific fields. My knowledge of the geology of the Columbia Plateau I learned under Dr. Bentley allowed me to successfully compete to work as a hydrogeologist for Ecology. Working with Dr. Bentley on the stratigraphy and structure of the plateau gave me the necessary boost to land the position. I was a student of Dr. Bentley "God Damn It", Dr. Ringe and Dr Hinthorne.

My colleague Brian Dick and I probably have the distinction of being the only CWU Geology students to be asked to graduate because we were a bad influence on the younger students.

My wife and I married later in life and have no children. We love to travel both within the US and abroad. We are avid sea kayakers, hikers and gardeners. I am an avid motorcyclist and cycle restorer.