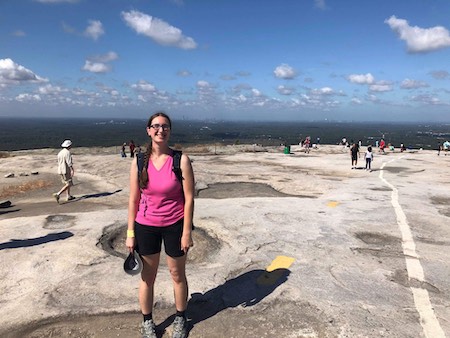 I got my BS in geology from Central in 2014 and moved to TN in 2015 to start my MS in geology at the University of Tennessee in Knoxville. My thesis research involved geologic mapping on Mars using GIS and studying some thrust fault features there called "wrinkle ridges". This was cool because one of the best known terrestrial analog features for these ridges are the Yakima Fold and Thrust Belt, which we've all come to know and love!

Towards the end of my degree, as one does, I began looking around and applying for jobs. But nothing really stood out to me as something I would really love doing. After a bit of thought I realized that the sessions and discussions that had been really interesting to me at conferences were the ones on data management. So I went on to get another MS at UTK in Information Sciences, where I focused my studies on research data management.

With that experience from both my MS degrees I was able to get a job at Sandia National Laboratories as a data engineer. I work in a geophysical technologies R&D group doing data management support for various projects. We do a lot of important national security work here. It's a great place to work and I love that I found a job where I get to use all my degrees. I also do a lot of science education outreach.

If anyone wants to chat about working at a national lab or science outreach, feel free to look me up on "LinkedIn!".