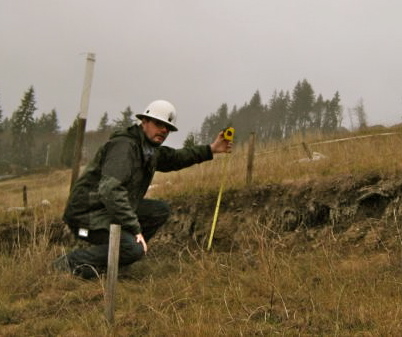 I am now entering my 7th year of working as the Geologist for the City of Bellevue. I had the pleasure of contributing my skills to the construction of an all new City of Bellevue Geologic map in conjunction with Kathy Troost of the UW. I also became a father about 1.5 years ago (Cenozoic Era) of a beautiful little baby girl that now takes a majority of my time, as one does. I am convinced that she likes her mother more than me, but I don't blame her.

About 3 years back, I began a new hobby called The Air-Raid Podcast and have been burning money ever since. I interview musicians and comedians that come through Seattle and talk with them about their lives. We have been lucky enough to meet and talk with people like Bob Saget, Macklemore, Dana Gould, and members of Band of Horses.

About a year ago, my show was added to the roster of programs offered online for CBS Radio Seattle (KIRO) and am currently in talks about making it full fledged radio show...keep your fingers crossed. As of right now the show gets downloaded about 4,000 times a week and is heard by an international audience. You can check it out at air-raid . net.