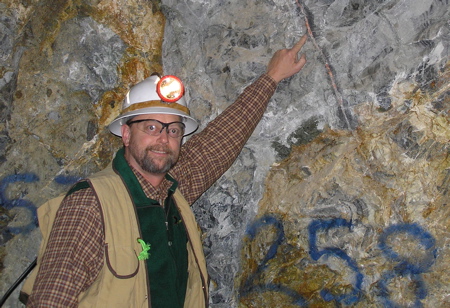 I am currently the Vice President of Exploration for Atna Resources (www.atna.com), a publicly traded gold exploration and development company based in Vancouver, B.C. My work is principally focused on mineral exploration and mine development in the Great Basin - and to a lesser degree in Mexico and Canada. My wife Wendy, our daughters and I currently live in Phoenix, Arizona.

Ten days after my 1977 CWU graduation, I was in the field and I have a vivid memory of my first field day as an exploration geologist. I spent three years in Alaska working on mineral exploration projects with WGM, Inc. where I searched for base metals, gold, and industrial minerals in central Alaska.

In 1979, a significant downturn in the Alaskan exploration industry occurred and I started looking for new opportunities. I found an exploration geologist's position with Homestake Mining Company in Reno, Nevada and moved from Alaska to Reno in November of 1979. Homestake was a great company to work for and I was given wonderful opportunities to grow professionally. I spent 15 years with Homestake exploring for gold deposits in the western US, Canada, Chile, and perhaps the best assignment was reconnaissance exploration in New Zealand. The exploration group had great success discovering several major gold deposits including the McLaughlin deposit in California, McCrae's in New Zealand, and the Ruby Hill mine in Nevada.

In 1993, a management opportunity arose with Cyprus Amax Minerals in Reno working with my long time boss from my time at Homestake. I joined Cyprus Amax as its Great Basin District Geologist. From 1993 through 1999, I worked in the Western US and Alaska as the US Exploration Manager before being transferred to the corporate offices in Tempe, Arizona in 1999. Shortly after arrival in Tempe, Phelps Dodge launched a hostile take over of Cyprus and we all got our walking papers. While disappointing, it did give me an opportunity to go back to school and I began an MBA program at Arizona State University in 2000 - graduating in 2002.

I consulted in the mineral industry until 2004 when the metal markets began to again show promise. I accepted my current position with Atna Resources in January 2004, based in Reno (but still living in Arizona). So far, we have had one multi-million ounce gold discovery at the Pinson Mine in northern Nevada and are exploring several other projects throughout the Great Basin. Working for a small entrepreneurial organization like Atna is a material change for me after spending the bulk of my career with what were Fortune 500-sized companies. One wears many hats in small organizations, but also has the ability to fundamentally influence the corporation, its direction, and success.

While in Reno, I married another geologist who I had met originally when we worked in Alaska. Wendy received her undergraduate at University of Michigan and her MS in Geology from the University of Western Ontario. We have two daughters - one at Emory University in Atlanta and another who will be attending University of Richmond in Virginia in the fall of 2008. Much to our chagrin, neither of our daughters have much interest in geology or science as career paths, but we are proud of them nevertheless.

Certainly 30 years of exploration geology has taken me a long way from Central, but the foundation that professors - such as Bob Bentley, Don Ringe, and Steve Farkas - gave me during my days at Central has served me well for three decades. Central will always be a special place to me and I will always be thankful to those who fostered my interest in geology and gave me the fundamental tools and knowledge necessary to make science a career.