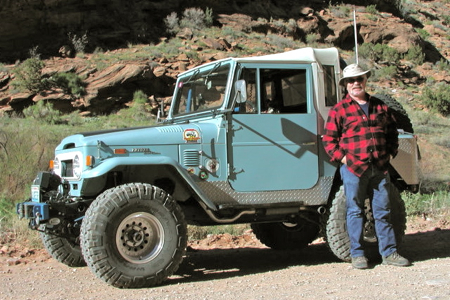 In 1971, I returned to Central and met Dr. Bentley, who became my advisor. When I told him that I was sure geology was in my future, he said "let's find out" and signed me up for straight geology courses. It was good advice and I had a great time "mapping basalts" for the next two years. Married my wife, Susan, in Grand Junction, CO in 1972.

Following graduation, I left for Olympia and joined the State Division of Geology and Earth Resources (State Division of Mines and Geology at the time) as a summer field geologist. For three months I had an absolute blast assisting Dr. Weldon Rau (see Greg Cloud '71), mapping the Washington coast from the mouth of the Hoh River to La Push. We rediscovered the location of the first oil well drilled in the state,"Hoh #1". The following 3 months were spent assisting a staff geologist with a seismic risk study of the Puget Lowlands, which included publishing a "Thickness of Unconsolidated Sediments, Puget Lowlands" map (GM-12) of the Puget Sound Basin. With no prospects of a permanent position, it was time to move on.

In 1974, Sue and I moved to Uravan, Colorado, where I joined Union Carbide Corp. as a mining geologist working underground uranium mines in western Colorado and eastern Utah . Company geologists were assigned mines and were responsible for underground mapping and drilling, searching for additional deposits in the Uravan Mineral Belt. 1975 brought a transfer to the exploration group in Moab, Utah. We worked the Triassic and Jurassic formations of the Colorado Plateau and I became thoroughly hooked on the desert country. We bought a 1972 Land Cruiser (still have it) and spent lot of time both in the Utah desert and the San Juan Mts. in Colorado. We even ran into an old friend and fellow alumni, Steve Sheriff ('73) on Cinnamon Pass, west of Lake City, CO. As I recall, he was doing some paleomag studies in the area. Small world!

1976 opened with another transfer. This time to UCC's uranium exploration office in Casper, Wyoming. As a Project Geologist, I got to experience the Powder River Basin, the Gas Hills/Wind River Basin, the Red Desert, and Great Divide Basin, Wyoming, and the Black Hills and NW South Dakota. Again, we ran into another fellow alumni, Randy Reneau ('73), when he moved to Casper, WY. It was great downing a few and swapping lies about all the uranium we had found. I chased drill rigs from the time the mud dried in the spring until the snow started flying again. On one major project SW of Rawlins, WY, I was able to convince the boss we needed to bring on CWU alumni Jim Power and Kerry Albin ('78) as field geologists. We had a great summer and I still talk to those guys from time to time. In fact, Jim turned me on to this website.

In late 1979, I transferred into Carbide's Land Department in Grand Junction, Co, where I spent the next couple of years traveling the country, including Alaska, negotiating mining leases and staking claims. The most memorable time was spending 45 days re-monumenting our patented chrome claims near Seldovia, AK. Work was done on foot or by helicopter. What a great time.

Following the downturn in the uranium business, we returned to Casper in early 1982. I joined EMC Energies, Inc., a small, public oil & gas company, as Vice President, Land Manager and geologist. We drilled a few wells in eastern Colorado, partnered in a few in Wyoming, and it was great while it lasted. However, in early 1986, the price of oil started down and EMC, like so many others, ultimately closed. We returned to Washington, where I opened a business in Tacoma. We sold the business in 1989 and in 1990 I hired on with RZA Agra, a geotech company in Bellevue, doing environmental geology and site assessments for commercial property transfers.

Wanting to get out of the rain and traffic we moved to the Tri-Cities in 1991 where I worked for various contractors at the Hanford site as a Training Specialist. We trained Dept. of Energy workers around the country in Federal Regulations and the requirements for managing, working with, and transporting hazardous and radioactive materials. I've also seen Jack & Lorraine Powell ('75), who got me caught up with current events.

I retired in 2006, and we are staying in the Tri-Cities. I have many fond memories of CWU, my classmates, and Drs. Ringe, Farkas, and, of course, Bentley and his "amphibolite god". We are enjoying traveling around the West seeing the sights or exploring the back country in our Land Cruiser. If you get near the Tri-Cities, give me a call 509.531.3819.

The attached photo is from a recent trip to the Moab, Utah area. Love that desert...