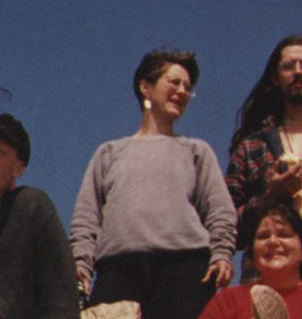 Alas, Carol Dupuis '95 has left us for the Great Field Area in the Sky after a characteristically spirited and determined bout with cancer. Not much else could stop her.

Carol got a late start in academia, but approached it with particular gusto. She was a sponge for knowledge, a model student, and threw some terrific parties. I am particularly grateful for her compilation map of our field camp area in the Little Maria Mountains, which got Doc Bentley off my back in a quite undeserved fashion.

For her master's at the University of Kansas she did a much needed overhaul of the geologic map of the Arica Mountains (painstakingly digitized and georeferenced), producing along the way some U-Pb dates that helped resolve a serious disagreement in geologic timelines between the eastern and western Mojave Desert. The resulting GSA field trip culminated in the final confrontation between the forces of Wholesome Polyphase Deformation versus He Who Shall Not Be Named, which I'm very sorry I missed.

After grad school Carol's considerable skills in synthesis and managing argumentative geologists found a productive home at Exxon, where she worked for most of the last decade. I imagine working with her made Houston a lot more fun.