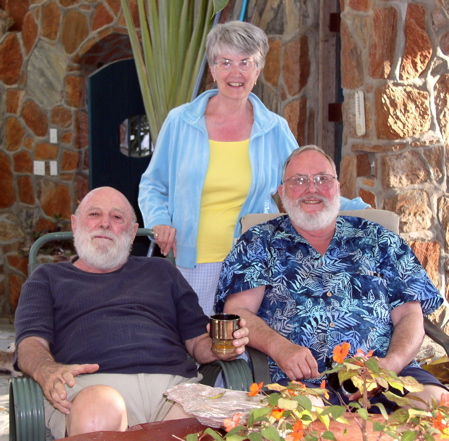 I am substitute teaching in the Sequim School District after ending a ten year teaching stent. After Hanford, I worked for a company as a trouble-shooter and 18 wheeler driver. We furnished contract services to the Forest Service during forest fires and other national disasters. I did this for six years. Decided that I would finish my working career as a science, math, history teacher. Thus went back to college to get the Ed classes and the necessary endorsements and have been doing that since '92. Moved to Sequim in '98 and ended up working in this district since then, five years full time and the last two just subbing.

Back in the '70's, I returned to college after I sold my business. I was interested in why the ground I had farmed for twenty years had the type of rocks, soil and huge granite boulders in it. I met Bob Bentley in the men's room - of all places! After that short conversation with him, I decided that I wanted to study Geology and hoped to have him for a professor. The two years that I was there, he was gone.

In the late 70's, I had to do battle with the Academic Vice-President to maintain the Geology Department at CWU. Since I was in my forties and not intimidated by the chain of command, when the new President of the University asked if we would like to meet with him to discuss any concerns we had for our department, I got a group together and we did meet with him, at least twice. The department has grown and now has a graduate program as well. It almost ceased to exist! The administration was going to reduce it to simply the introductory courses to satisfy the science requirements for other majors. Many of my classmates were a bit concerned about being involved in a rebellion, but we prevailed. We must have presented our case pretty well, for two more professors were hired in 1979. I came back in 1980 to take the Field Mapping course from Bob Bentley, Don Ring and Phil Long.

I went to work for Phil Long at the Hanford BWIP project until it was closed down in 1988. I became a bit of problem at BWIP just before they were closed down - because I again made waves. This time I got myself placed on a no hire list for other geology positions at Hanford. That turned out okay, because I ended up having two additional vocations since then.

For fun, I work on radio controlled aircraft of all sizes from 24 inch wing spans to 12 foot wing spans. I spent a few days with Bentley late last spring, 2007. He has quite a place down there in Todos Santos, Baja California, Mexico. I am going to try to set aside a week to help him with some of his projects in 2009.

Other than the volunteer work that my wife Janie and I are involved with at our church and community, we don't do much. Maybe complain a bit about how things didn't go the way we would have liked after we voted, but then life is not as carefree as when I was in school at CWU. A lot of hard work, and a lot of great memories.

In the photo (left to right): Bob Bentley, my wife Janie, and myself.

UPDATE: Went from Geology at Hanford from 81 to 88 to driving 18 wheel semi's back to school at WWU in 90 and taught in middle school and high school until was 81, when it became necessary to home care my wife until 2020 she required being admitted to Memory Care in February. I survived COVID-19 and am doing very well. Turn 85 this fall. Will look in on your lectures every now and then. Thank you for keeping the updates.